Porto. Central Square Avenida dos Aliados. The palace-like noble building designed by Michelangelo Soá and built in 1925 harboured on the most luxurious cafés in the 30s. Café Monumental became Monumental Lodge, and its façade slowly turned dismal, almost ghost-like for the ones who walked passed it in the last few decades. It was a car stand, a head office of a political campaign. It has recently reclaimed its monumentality thanks to entrepreneur Mário Ferreira’s vision and to French hotel chain Maison Albar Hotels (MAH) that thus surrenders the Le Monumental Palace to the city, right on the heart of the city, Avenida dos Aliados.

‘It was a place for leisure, often visited by people at the time. It had an orchestra and a snooker room. Gradually, it lost that identity, and transformed itself’, says Floris Boyen, director of the Le Monumental Palace, after three years of renewing works by Mystic Invest, Mário Ferreira’s. The hotel was afterwards acquired by the Paris Inn group, which, in turn, later joined Maison Albar Hotels, under LHW (The Leading Hotels of the World).

‘The works literally started from scratch’, he reminds. ‘The façade remained. Everything else is new.’ The first documents to which the team had access are from 1923, ‘short newspaper ads that showed the lettering’, which has been modeled on, ‘and stunning old photos’. The rest underwent police novel-like ‘search’, with decorated beams and corners, found amidst torn-down walls, ‘banisters and pieces of marble’ hidden behind a wall or a stair flight. Belgian Floris Boyen says that ‘that was respected, and was an inspiration for the decorators. One night, I was told “we were like spies”’.

For those who don’t know the full story, the elegant Le Monumental Palace, seems to have been closed since the 20s to reopen its doors after duly dusted. Inside, original memories glow, like the staircase banisters and the incredible clearance that portrait its ancient glory.

Alongside the structural recovery, the decoration by the team Artur Miranda/Jacques Bec, of Oitoemponto, has gracefully recreated the spirit and ambience of the 30s’ iconic Art Déco and Art Nouveau styles. If time destroyed the body of the building, those who recovered it kept its soul. 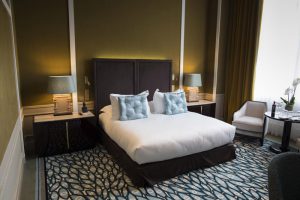 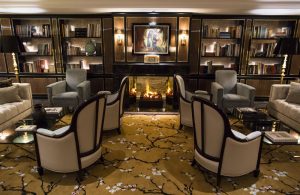 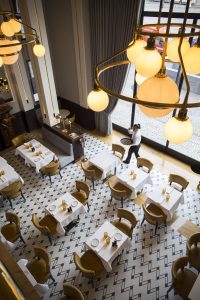