Mega mixed development Cinnamon Life tops off all its buildings

May 29, Colombo: Colombo’s landmark, skyline-transforming development project Cinnamon Life marked a key milestone in its construction this week, with the topping-off of all its towers as well as the luxurious 800-room Cinnamon Hotel building. A remarkable 21 million-man hours across 10 acres of land has delivered the completion of structural work on one of the most iconic structures in Sri Lanka. The event was marked with a private in-house ceremony attended by John Keells Holdings Chairman Krishan Balendra and Deputy Chairman Gihan Cooray.

The announcement marks the completion of a series of successful developments at Cinnamon Life since construction commenced in 2014. The ‘Suites Tower’ was topped off in December 2018; this was followed by the structural work of the ‘Residence Tower’ and ‘Office Tower’ being completed in April along with that of the hotel – a signature Cinnamon Hotels & Resorts property that will lead the brand’s portfolio of luxury hotels.

Officials noted that a record-breaking 1000 piles of reinforced concrete went into the structure’s foundation – bringing the weight of the reinforcement (232,000 cubic meters of concrete in total) to 32,000 tons. The entire compound is highly accessible with 88 elevators and 22 escalators in total – the highest number to be installed in any project in Sri Lanka to date.

Cinnamon Life’s integrated hotel and mixed-use development will offer the finest of inspired living within the city of Colombo. At the hotel, Cinnamon’s trademark contemporary Sri Lankan hospitality will come alive with a rich variety of specially curated experiences, the finest amenities and access to a host of exclusive facilities and VIP benefits. The hotel will be home to 20 restaurants and bars, including six specialty restaurants housed within the tower along a ‘Sky Lobby’ at Level 24 with separate VIP lobbies and drop offs. In addition, there is banquet style seating capacity for 3300+ individuals and conference style seating that has the capacity to host 5000+ individuals at any given time across five venues. Connected to the hotel is a mall which will comprise of five levels of unique retail spaces, entertainment facilities, a wide variety of restaurants and much more.

Cinnamon Life is expected to be the hub for MICE (Meetings, Incentives, Conferences and Exhibitions) activities in Sri Lanka, especially attracting large scale MICE events from India. The ‘Office Tower’ is a 30-storey A-grade workspace designed on a ‘shell and core concept’ with each floor consisting of a usable 10,564 Sq. Ft. area. The situational advantage of the office spaces combined with the inflow of MICE travelers is expected to bring in healthy demand for short to medium term rentals at the residential towers – ‘The Residence’ and ‘The Suites’ located on either side of the hotel. Internationally renowned furniture company Design Studio Group will furnish the pantry cupboards and wardrobes in these apartments – which will be the city’s most premium lifestyle offer.

Remarking on the progress of the project and the impact it will have on the country Suresh Rajendra, President of JKH Property Group said: “We are very pleased to announce this key milestone in the development of Cinnamon Life with the completion of key structural work on this building. Now, Sri Lankans can truly behold the transformation this development brings to Colombo’s skyline. As the project is nearing completion it draws us closer to what will become the renewed standard of luxury and integrated living for this region. Cinnamon Life will redefine the Colombo experience for those that live here and those travelling here.”

Cinnamon Life is being developed by Waterfront Properties (Private) Limited which is a subsidiary of John Keells Holdings PLC (JKH), Sri Lanka’s largest listed conglomerate in the Colombo Stock Exchange operating over 70 companies in 7 diverse industry sectors. The market capitalization of JKH was recorded at Rs.205.64 billion as at 31 March and represented 7.9 per cent of the total market capitalization of the CSE. JKH provides employment to over 20,000 persons and has been ranked as Sri Lanka’s ‘Most Respected Entity’ for 13 years. 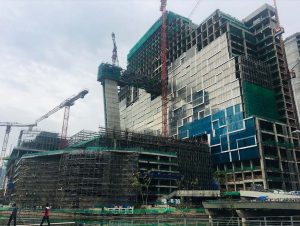 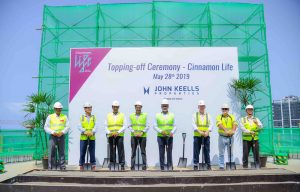